Back at the blog game. Its been a while.

We’ve moved back to our hometown, and welcomed our daughter, Ella, into the world in November! 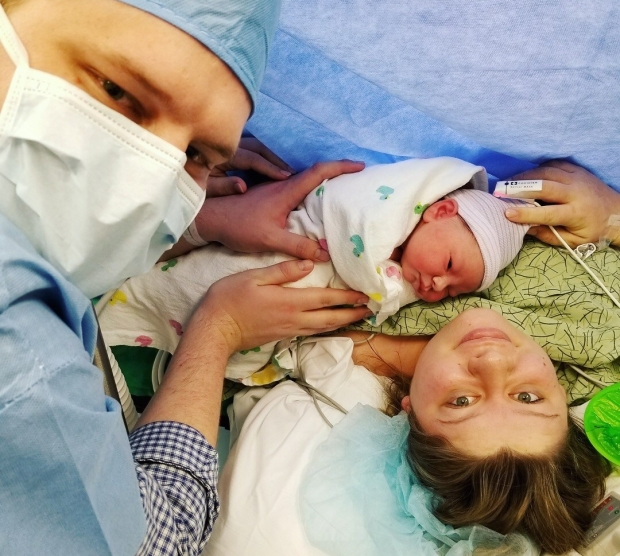 Y’all don’t even know how hard I was trying to look cute in this photo. Labor was not good to me.

Last night I was thinking about this Podcast I used to BINGE during my pregnancy called The Birth Hour.

I have a very long commute to work (about an hour one way), so I listened to a couple episodes of this podcast a day. Basically, the host of the show interviews women on how their pregnancies and deliveries went — super cool!

I did not enjoy pregnancy. Don’t get me wrong. I loved feeling baby kick and move, and I feel so blessed to be able to house our sweet little baby for 9 months. But my goodness, I was more than ready for her to be born. My maternity leave started on November 1st, which was just a few days before E’s due date (the 4th). A few days ago, I was joking with my sister-in-law that my google search history in those days looked like “how to naturally induce labor at home” “does spicy food induce labor” “how many miles to walk to induce labor”. I was a hot mess. Despite the occasional contractions, Ella remained a little bun in the oven.

Finally, my due date rolled around. I woke up around 8:30 am REALLY needing to go to the bathroom (per usual), and because I had nothing better to do, I got back into bed. After a while, I began to get uncomfortable so I rolled over. And then I felt a small gush of fluid.

So I got up to check out what happened. It wasn’t a lot of fluid, so I thought that maybe I had just peed myself. Because, you know…pregnancy.

I waited, and had a few contractions over the next several minutes but because I had been having contractions on and off for a while, I didn’t really think anything of it. I made sure that all of our bags were packed just in case, but I continued on normally with my day. At about 6 pm, I decided that it might be best to call my doctor because I wasn’t really sure what was going on at that point. She told me to come in to get checked out, so we packed up and headed out.

When we got to the hospital, they checked and confirmed that it WAS my water that had broken. I labored naturally until about 4 am on the 5th when I asked for pain medication. That worked until it didn’t, and then I finally requested an epidural. The nurse promised that an anesthesiologist would come asap. After a few minutes, she came back in and let me know that the anesthesiologist there had just been called into an emergency surgery, and so they were waiting on another to arrive.

After waiting what felt like an eternity, he finally walked in my room and I have never loved another doctor more. Contractions are no joke.

I continued to labor throughout the day, and was making little progress. My OB came in and said that if I hadn’t made significant progress in the next hour that I would have to have a C-Section. This is the part that I thought I might be upset by, but at that point I was so tired that she could have started wheeling me back to the OR right then and I wouldn’t have cared. About 30 minutes later I began to spike a fever, so it was decided that it was time for E to be born. At 7:54 pm on the 5th Ella Kimber was born.

After that, the days that we were in the hospital were pretty much a blur. But let me tell you, I packed SO MUCH STUFF that I didn’t need.

Like a lot of people, I read blog posts, asked friends, and did a ton of research on what to pack in our hospital bags. Even though I didn’t pack as many things as some people (you don’t need an essential oil diffuser, I promise) I actually only needed just a few of the things I packed. Below are are my thoughts.

While we were in the hospital, Ella used 2 of her own outfits. One sleeper and one going home outfit. All of the other time, she was in a hospital shirt and swaddle. That cute Milkmaid Goods  headband and swaddle set I spent good money on? Nope. Didn’t use it. I was just too tired!

^Additionally, you’ll need a carseat…but we all knew that.

For the first day (at least), I wore a hospital gown to avoid bleeding on my own stuff. #glamorous Once I was ready to put on my own clothes, I realized I had only packed some tshirts and high wasted leggings but I severely miscalculated 1. how difficult it would be as a beginner to nurse in a tshirt, and 2. how much I would not want to wear anything high wasted after a C-section. Luckily, my brother and his girlfriend were able to pick me up some oversized pajamas from target. Woo! They were button down, so I was able to wear a nursing cami under and still feed Ella easily. Other than that, I used the slippers and socks I brought, as well as my toiletries and small amount of makeup that I brought to spruce up my going home outfit (which consisted of some maternity jeans and a tshirt with a nursing cami underneath). I also purchased a gray, lightweight cotton robe, which was great to have too, but I wouldn’t consider it an absolute necessity.

And thats it. No chapstick that everyone swears you’ll need. No curling iron. No zen iPod playlist.

If you’re a pregnant first time mom and you’re reading this and you’re obsessing over every detail like I was, know that everything is going to be okay! You don’t need to worry about what to pack. The hospital will likely provide you with more than enough to keep you going throughout your stay. Even if all you came to the hospital with was a carseat, you’d be fine.

Bring an empty bag. If you’ve opened a pack of those huge (read: wonderful) pads,  you’re being charged for them so bring them home! Ask your nurse what else you can take. You might be surprised. We left with a mostly full bag of diapers and pumping parts, along with the usual stuff like one of those massive water cups and socks.

Take sooo many pictures. I was so tired and looked awful, I wish we would have taken more.

Take. Naps. The first few days can be stressful. Its okay to stop and take care of yourself.

There are 2 things that I wish I would have packed that I didn’t — A phone charger with an extra long cord and a boppy pillow. I’m not sure why they put the outlets so far away, but they always do! With everyone texting, it would have been nice to have a longer cord so I wouldn’t have had to keep asking Adam to plug my phone in for me. And as for the boppy…breast feeding is so awkward with such a tiny baby! I wish I would have grabbed mine.

Did you have any must-have items on your list? Let me (and others!) know in the comments…and as always, thanks for reading!

One thought on “Well Hey There! Ella’s Birth + Thoughts on Hospital Bags”

welcome to my blog!